Soon after Utah became a state, Utah passed a law in 1897 that prohibited Native Americans living on a reservation from voting with the justification that they were not residents of the state of Utah. That law continued to be enforced until the Ute Tribe challenged it in court in 1956.

Preston Allen (1913-1989) was a 41-year-old Ute rancher chosen to be the voting rights test case. As a youth, he attended the Riverside Indian Boarding School and served 4 years in the US Army during WWII, rising to the rank of SGT. In 1956 he lived in Altonah on the Uintah and Ouray Reservation and was the Vice President of the Affiliate Ute Citizens group.

Preston asked for an absentee ballot from the Duchesne County Clerk, Porter Merrell, to vote in the 1956 election. Following the Utah Attorney General’s directive, his request was denied as he was living on a reservation.

In 1956, Allen v Merrell was heard by the Utah Supreme Court who decided that the 1897 law did not deny the right to vote on the basis of race (a clear violation of the equal protection clause).

Rather, the court decided that reservations (both miliary and Native American) were under the control of the federal government, so state and county elections were not applicable there and that Native Americans had a very limited interest or understanding of government and they should not be involved with state politics.

Most telling, however, was the court also expressed fear that Native Americans might outnumber the White voters.

The case was appealed to the US Supreme Court but before it was heard the Utah Legislature amended the 1897 law, making Utah the second to last state to allow on-reservation Native Americans the right to vote (North Dakota did so in 1958). 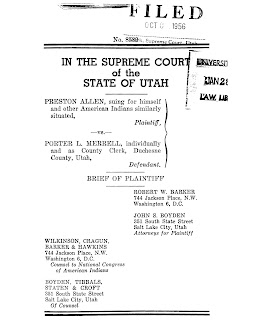 Unfortunately, this was not the end of voting restrictions on Utah’s Indigenous people. The Ute continued to have problems in Duchesne County. The Navajo in San Juan County also have difficulty as demonstrated by a 2018 lawsuit settlement with requires San Juan County to implement corrective action for past actions that marginalized the rights of Navajo voters. 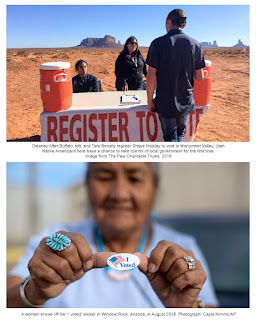