Perils of Banana Peels on the Streets of Salt Lake


The historic newspapers of SLC are full of stories of the perils of banana peels on the sidewalks. Below are a few of the more extreme examples:

The Old Post Office Apartments located at 777 East 200 South SLC, is in fact, an old post office.
The building is made up of two attached structures: a house that was built in 1880 and the Post Office building constructed in 1904.
First let’s start with the old house (now 773 & 775 E. 200 South). This part of the structure was built ca. 1880 and changed hands relatively frequently, often being used as a rental.
The last person to rent the house before the post office was built was Reverend Frank Barnett, pastor of the SLC Eastside Baptist Church; he left SLC for health reasons in 1904.

The two-story Post Office building was designed by Richard Kletting (also designed the Utah State Capitol, Saltair, and many other building) and was built in 1904.
The top floor contained two apartments with all modern conveniences while the ground floor contained the post office and a commercial space occupied by a drug store. The post office was formally named “Station A” and was the first sub-station of the main post office, at that time located in the Federal Building in downtown SLC.

Station A served areas east of 500 East and was a fully functional post office with 14 carriers being assigned to the office. The Postal Service never owned the building, they merely rented it from owner Charles Crane (who owned several properties including the still standing Crane Building at 307 W 200 South).

The Postal Service abolished Station A in 1913 reasoning that it would be more economical to consolidate services at the main post office after additions had been made to the Federal Building. Once the postal service vacated the space was used for commercial operations including a drug store, an ice cream factory, and a dry-cleaning service.

In March 1939 the building was renovated into nine 3-room apartments. The large glass storefronts were bricked in a new residential entrance made.

SLC has a long history with quarantining its residents


SLC has a long history with quarantining its residents.
The first ordinance was formalized on March 12, 1850: Before emigrants could enter the Salt Lake Valley they needed to pass through a quarantine station at the mouth of Emigration Canyon to isolate new arrivals who were ill.
Later an isolation hospital, commonly known as the Pest House, was constructed in this same area; this area is now the Bonneville Golf Course.
By 1871 the “Yellow Flag” rule had been formally established into law: "A yellow flag should be displayed conspicuously on a quarantined residence giving notices that the premises are infected and prohibiting entry to the premises until all danger from infection have ceased and the area disinfected."

In 1910 quarantine rules continued to be refined and the yellow flag had been replaced with a yellow warning sign. New rules were also issued by the Salt Lake Board of Health, a selection of which are below:
Sources: Deseret News 05 Aug 1871 p2; Deseret News 19 April 1910 p8; The History of Emigration Canyon by Cynthia Furse and Jeffrey Carlstrom
Posted by Rachel Quist No comments:

The Godbe-Pitts & Company Drug Store originally located at 101 S. Main Salt Lake City (The southeast corner of Main and 100 South).
Many medicines in the pioneer era were made from herbs grown in the yard of each family's home. However, people relied upon commercial drugstores like Godbe-Pitts & Company for more exotic herbs that were not found in the intermountain area and for processed medicines brought from the East. Druggists in those days were not necessarily trained in medicine like today's pharmacist.

Source of text: This is the Place Heritage Park 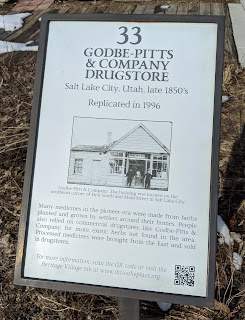 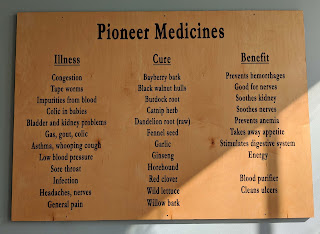 
October 2 1918, the first case of the Spanish Flu in Utah was detected in Salt Lake City and was thought to have been brought to SLC from Evanston, Wyoming, by a family who came to attend the State Fair (which had opened just a few days previous). In the next few days several more cases of the Flu were documented, all from people who had recently traveled from out of state.

The first death from Spanish Flu in Utah was in Ogden: John Corgan, a traveling salesman from Omaha fell ill on a train and was hospitalized and then passed away on October 3. His body was shipped back to his home state in a hermetically sealed casket.

The large public gatherings of the State Fair and LDS Conference, both held the first week of October 1918, enabled the Flu to spread quickly during its incubation period. Symptoms of the Flu in the general population appeared soon after these events.

The Utah State Board of Health issued orders On October 10, 1918, to ban all public gatherings (schools, churches, lodge meetings, theaters, etc) effective immediately. The sick were diverted to the old Judge Mercy Hospital, which reopened specifically to treat Flu patients.

The ban on public gatherings was in effect until the end of 1918 (although Armistice Day of November 11 was a notable exception, which resulted in another uptick in Flu cases).
The pandemic lasted well though 1919 with 9% of the SLC population falling ill and a fatality ratio of 5.6%.
Source: influenzaarchive.org
Posted by Rachel Quist No comments:

The Ladies Literary Club built their original clubhouse in 1898 after 21 years of planning and raising money. The clubhouse formally opened to its 150 members on January 7 1898.

Located at 20 S. 300 East, the opening was significant as it was the first women’s club located west of the Mississippi River to have its own clubhouse.

Upstairs housed the library and the large hall designed for club meetings and dances. The basement held the reception room, dining room, pantries, dressing rooms, and janitor’s apartment. It was heated by steam and lighted by electricity. A fully modern building for the time.

In 1910, the Ladies were offered $8,250 from the B’nai B’rith Hall Association. A special meeting was held and the Ladies voted to accept the offer netting them $8,000 for which they put towards their new clubhouse, which is still standing, at 850 E. South Temple.

After the purchase, the original clubhouse was renamed B’nai Birth Hall. The property then changed hands for the next few decades and included becoming Miss Lillian Smith School of Dancing in the 1930s and the Seagull Press in the 1950s. The last record I can find of the building still standing is in 1955 when the Seagull Press closed due to illness of its owner.

The building must have soon thereafter been demolished. It is currently a parking lot for the Larkin Mortuary building.


Mary Jane Smith (1864-1913) is notable for being the first woman convicted and sentenced for the crime of murder in the state of Utah.
She was not the first Utah woman to be accused of murder, nor tried of murder… but she was the first to be convicted.  She was also an African American woman.

In 1902, Mary Jane Smith was down on her luck. She was working as a prostitute in Salt Lake's notorious Victoria Alley: a midblock alley on Block 57 (between Main and State Streets / 200 S and 300 S) with a barely noticeable narrow 12 foot entrance located at 232 S. State Street. This area is now wide open and occupied by the Gallivan Center.

Mary Jane was in need of rent money and decided she would rob one of her customers, a miner who had only been in SLC for two days- Daniel Ryan. She dosed his beer with morphine in an effort to knock the man out but not knowing the proper dose to administer she gave him too much.
He lay in her bedroom at 47 Victoria Alley unconscious until Mary Jane asked her paramour, Mat Wilson, to remove the dying man. Mat Wilson put Daniel Ryan in the nearby outhouse and left him to die. The body of Daniel Ryan was found the next morning.

Mary Jane Smith was soon arrested and the evidence against her was strong, especially since two of her accomplices agreed to testify against her for dropped charges. When her trial for first degree murder was about to begin she plead guilty to second degree murder; she was told that she would likely receive a lighter sentence and her attorneys argued for leniency.
Unfortunately, Judge C. W. Morse wanted to make an “example of her for the future protection of society” and sentenced her to 20 years of prison at hard labor. The 20 years was within the allowable sentencing guidelines but it was seen by many as excessive punishment, especially as the victim was a transient and the perpetrator a resident of the tenderloin district where crimes were often overlooked.

Mary Jane apparently took the news of the sentence in stride as she was quoted in the newspapers as saying “I don’t care what they do because I’m going to live anyhow until I die.”

Prison life must have been lonely for Mary Jane. Sometimes there would be one or two other women in prison but mostly she was alone. She worked as a prison cook and laundress.

Mary Jane served 10 years of her 20 year sentence. She was pardoned and released at the end of November 1913 as she was ill and not expected to live.
She died of cancer at the Salt Lake County Hospital on December 27, 1913. She is buried without a headstone at the northern edge of the Salt Lake City Cemetery.