The history of Salt Lake City, and other areas in Utah, have made the news recently. Here is a news roundup of some of those stories. Direct links are in the captions.

While perusing the digital collections of the University of New Mexico, I came accross these new to me photos of Black Rock in the Great Salt Lake.  Black Rock is a geologic feature near the present-day Great Salt Lake Marina and State Park.

These were taken by William Henry Jackson in about 1880.

The Centre Theater was opened on December 24, 1937, with Carole Lombard & Fred MacMurray in “True Confession”. It was considered one of Salt Lake’s finest examples of Art Deco style architecture. One of its most unique features was the 90-foot tower located above the theater. It was built by Paramount Pictures Inc. and Intermountain Theatres. By 1941 it was operated by Paramount Pictures Inc. through their subsidiary Tracy Barham.

In 1989, Cineplex Odeon let its lease run out so the owners could demolish the building. A new office tower was built on the site, along with a bland six-screen multiplex.

RealScape recorded this tour to preserve what they could, as demolition is proposed for this Ballpark gem. Check out that woodwork!

Here is the link to the full tour. 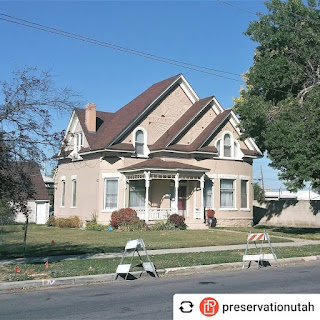 Over the past several weeks, many have been very sad to learn that two historic houses in Salt Lake City's Ballpark Neighborhood will likely be demolished in short order and replaced with a condo or apartment building. These houses, 1350 and 1358 South West Temple, both built around 1900, have lent the Ballpark Neighborhood a great deal of character over the past 120 or more years.

1350 is our favorite of these two houses as it has some really wonderful architectural features. It is rare to find houses in Salt Lake that boast gables as ornamented as those found on this house. Imagine the skill required to piece these gables together!

Many know that 1350 served as a home and headquarters for Jerald and Sandra Tanner of Utah Lighthouse Ministries. We tried to uncover the earlier chapters of 1350's history.

The first bit of information we could find on 1350 dated to 1917, when three of its rooms, "newly painted and papered, partly modern" came up for $8 / month rent. The next year, the whole house could be rented for $16/month rent.

By 1922, 1350 S. West Temple sheltered Thomas S. and Olive Van Cott Davis who remained in this house for many years. It is easy to fall in love with the Davis family via records of their comings and goings in local newspapers. While at 1350, the Davis's celebrated the weddings of their children, held DUP camp meetings, showers, and a large variety of other community gatherings. The Davis's stay at 1350 was also filled with tragedy. While living in this house, the family suffered automobile accidents, sicknesses, deaths, and other of life's vicissitudes.

It is no exaggeration to say that a great deal of life has played out at 1350 S. West Temple.

In the very near future, Preservation Utah looks forward to working with the Ballpark Community Council and other invested parties to introduce more of this neighborhood to the National Register of Historic Places and other preservation-centered initiatives. Hopefully, these efforts will help to preserve more of Ballpark's treasures.