Prehistoric Domestication of Turkeys and Their Complex Relationship with Their Keepers

Turkeys were domesticated in 2 regions of the Americas more than 2,000 years ago.

The Ancestral Puebloan people of the American Southwest domesticated the Eastern and the Rio Grande subspecies of turkey. This Puebloan breed is now extinct.

The Aztecs and their predecessors in Mexico domesticated the Ocellated subspecies, a colorful turkey that is now endangered. It was the Aztec variety of domesticated turkey that the Spanish encountered and recorded in the Florentine Codex.

The Aztec turkeys were shipped to Spain in the early 1500s where they were then distributed throughout Europe and selectively bred to produce the domesticated varieties we know today. The original Aztec breed is thought to still exist and genetic studies to sort out its lineages are ongoing.

I keep 2 female Spanish Black Turkeys, a heritage breed said to be closely related to what the Spanish found in the Americas.

Turkeys were/are very important to Pueblo people and archaeological evidence indicates they were kept in pens but also allowed to free-range forage. They mostly ate maize as provided by their keepers, their eggs were collected for food, and their feathers were used in a multitude of ways. Many of the turkeys were eaten for food and their bones were used to make items such as awls and flutes but some turkeys were buried in a prepared grave indicating a special relationship. 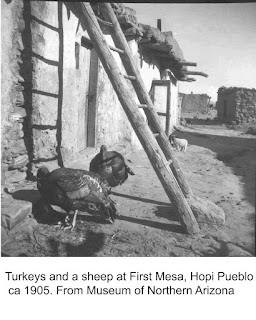 Southern Utah’s Ancestral Puebloan people made blankets from turkey feathers wrapped around yucca cordage; a rarely preserved example is housed at Edge of the Cedars State Park Museum in Blanding and likely dates to the 1200s. 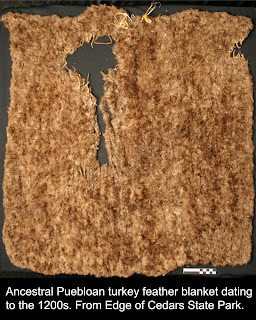 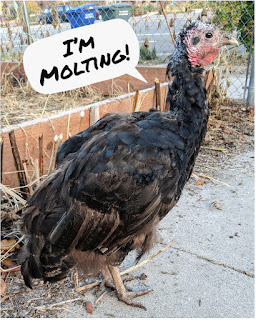 This Thanksgiving, think of that relationship between those prehistoric turkeys and their keepers. A relationship that was/is memorialized in turkey genetics, an ancient codex, art, music, religion, and fluffy blankets.