I’ve been attempting to find the origin of the name for Suicide Rock, the real reason… not the folklore tale. I have only been somewhat successful.

First, there is no official name for Suicide Rock in the US Board on Geographic Names. Officially it is unnamed but official SLC documents do refer to it as Suicide Rock.

The legend of its naming has been immortalized on a plaque near the site, it reads: “For hundreds of years, it stood as a watch tower for the Indians until, as the story goes, an Indian maiden upon learning of the death of her brave, leaped from the top to her death on the rocks below, giving it the name of Suicide Rock.”

In my research, I found this legend dates to the 1920s when it was often printed in newspapers and magazines. There are variations: sometimes it is unrequited love; sometimes her lover is dead; sometimes he returns to find her dead; and sometimes both plunge to their deaths.

However, the name “Suicide Rock” seems to predate this legend by several decades.
The earliest Euro-American explorers of Parleys Canyon did not seem to feel Suicide Rock was important enough to make note of. The writings of early LDS pioneers, including Parley P. Pratt, did not mention it. Captain Howard Stansbury did not identify it on his 1852 map nor anyone in his party mention it in their journals.

The earliest mentions that I could find were in the 1880s and it was called a variety of names including “the red dugway” “the Narrows” “Sentinel Peak” and “the Gateway.”
In the 1890s the feature was known as both “Suicide Rock” and “Sentinel Rock” and by then was the location of a reservoir.

By the 1920s the name “Suicide Rock” became the preferred name and the legend of the Native American maiden had solidified.

Although there were automobile accidents at Suicide Rock in the 1930s-1950s I did not find any mention of a recorded suicide at the geologic feature. In 1880 there was an attempted suicide at the Philadelphia Brewery (aka, Dudlers Inn) in Parley’s Hollow but the individual survived and it was not at the Rock itself.

So, I am at a loss of how Suicide Rock got its name. Anyone know of some pre-1890 sources that mention this geologic feature?

Sources:
Too many to name here but Florence Youngberg’s book on Parley’s Hollow was the most complete and accurate compilation of information that I came across. Highly recommended. 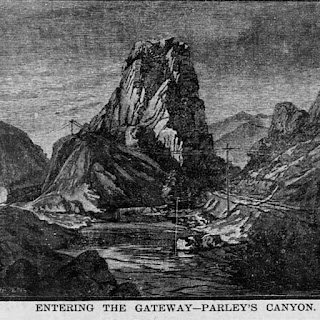 Illustration printed in SL Herald Dec 2 1889, with the name “The Gateway”