A railroad siding and 2 rail switches are still present in the Granary District of SLC (aka, SLC Warehouse National Historic District). They are located on the block bound between 300-400 West and 900-900 South I-15 Off Ramp.

The main railroad track was constructed in the 1890s. The main track is present on the 1898 Sanborn but the rail siding is not present until the 1911 Sanborn.

These rail switches were manufactured by the Pettibone Mulliken Corp in Chicago and are often called “star stand switches” or “star switches.”

A rail switch was used to change the direction of the rail track and allow a train to split from the main track. The attached lever was used to lock the tracks.

These tracks are no longer in service; they are owned by the State of Utah.

Please Please be respectful of these historic resources. There used to be historic crossing signs and a bell pole in this area as well, but those seem to have disappeared in recent years. 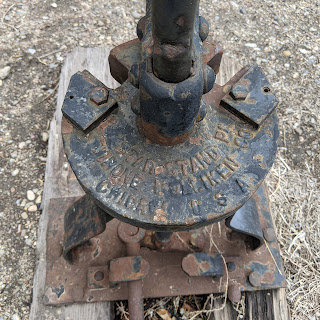