The Development of Block 64 into SLC's GreekTown

Block 64 (100-200 South and 500-600 West) is situated north of the TRAX Old GreekTown station. This post explores how Block 64 and the surrounding area transformed into Salt Lake's GreekTown.
When SLC was first platted in 1847 the 10-acre blocks were laid out in a grid pattern with Block 1 situated at SE corner of the city, at what is now 800-900 South and 200-300 East. Block 64 is located at what was then the western edge of the City.

Lots were divided among those early Mormons with the widow Nancy Baldwin’s family getting 2 lots on Block 64, the entire southwest quadrant of the block. When George W. Boyd married into the Baldwin family (he married 3 of Nancy’s daughters) those lots and others that he eventually purchased became known as the Boyd property. 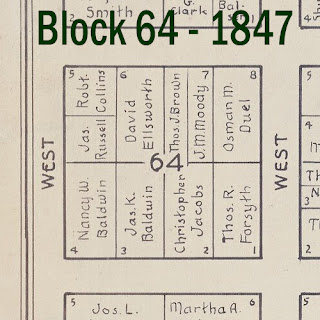 For several decades Block 64 remained as much of the rest of SLC– sparsely spaced adobe homes with each house having room for gardens, orchards, and farm animals.

The first railroad tracks were constructed to SLC in 1870 and in the next couple decades the railroad greatly expanded its operations and was a major employer on the west side of SLC. Even George Boyd, as an old man, worked for the railroad. 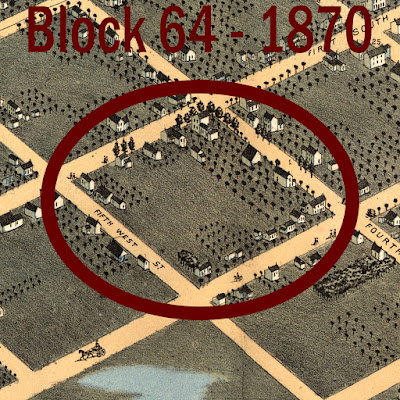 After more than 40 years of owning property on Block 64, George started selling his property to his children (and others) in the 1890s. William B. Boyd built tenements behind the adobe homes and named the area Boyd Court, which was later called Boyd Ave when the area became known as the Stockade.
Other property owners on Block 64 and surrounding areas were also building rental units and commercial spaces in the 1890s; notably A. R. Carter who built the large Carter Terrace on the north central side of Block 64 that was later converted to brothels (more on that later).

The 1890s also brought city utilities such as electricity, water lines, and sewer line to Block 64; paved streets came in 1902.

In the 1890s the property owners were still largely Mormon with about half of the buildings on Block 64 being older adobe homes. But some new elements, such as the Westminster Presbyterian Church, had started moving in and the neighborhood had begun its transformation. 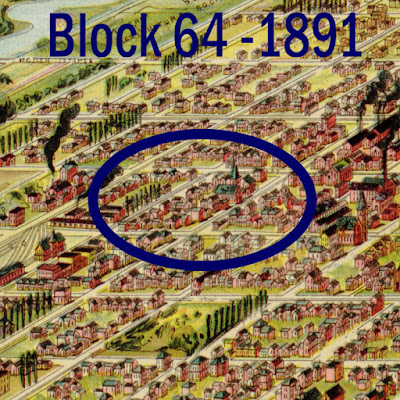 In 1900, there were only 3 Greek people recorded living in Utah. By 1910 there were 4,062 and they eventually became the largest labor force in the State. Poor conditions back in Greece encouraged immigration to America in the early 1900s.

Between 1900-1905 Block 64, and other surrounding areas, developed rapidly into a Greek enclave mostly due to Greek labor agents such as Leonidas Skliris and Nicholas Stathakos who brought in their countrymen to work the nearby mines and railroad.

In 1905 the Greek community had built its first church in SLC- the Holy Trinity Greek Orthodox Church located at 439 W 400 South (now demolished), the precursor to today’s Holy Trinity Cathedral built in 1923 (279 S 300 West).
Most of the Greek immigrants were male who sent money back their families in Greece. Only a few Greek Salt Lakers were able to send for their wife and children to join them in SLC. A fair number of Greeks were able to pay for the travel of brides picked by their family back home.
By 1908 the west side of 200 South had become known as GreekTown and, not coincidentally, SLC leadership decided to move the Red-Light District to Block 64 to try and break up the enclave of “undesirable” Greeks congregating in that area (among other reasons). More on that later.

The 1910s and 1920s were the peak of SLC’s GreekTown. Much like the rest of SLC’s downtown and other ethnic neighborhoods of SLC, the 1950s and 1960 saw decline through the elimination of public transportation and the emphasis on building up the suburbs.

Sources:
-  For more about the first platting of SLC: Cartography and the Founding of Salt Lake City by Rick Grunder and Paul E. Cohen. UHQ V87 N3, 2019.
- For more about Greeks in Utah: Toil and Rage in a New Land: The Greek Immigrants in Utah by Helen Papanikolas, UHQ V38 N2, 1970.
Posted by Rachel Quist