In 1893 real estate developer William P. “Billy” O’Meara bought these 3 parcels and his builder/carpenter, Sylvester A Work, constructed these homes at the corner of 200 S and Dunbar Ave (now Lincoln St).

O’Meara described himself as a “capitalist” and was prominent in SLC politics and business (especially real estate and mining).

O’Meara served on the SLC Council for a time and argued that the inmates in the SLC Jail could suffice on 2 meals a day to reduce costs; but he was also known to have a “warm spot in his heart” for the children in St. Ann’s Orphanage and organized charitable benefits.

In the 1890s, SLC was growing and these parcels were considered suburban with easy access to both the University of Utah and downtown SLC through the streetcar line on South Temple.

O’Meara and Work built these houses to sell to the emerging middle-class. The houses at 949 E and 955 E were both built in 1893 in the Victorian Eclectic Style with Italianate influences. There is some evidence that the house at 949 E at one time also had oriel windows like the house at 955 E.

The three houses were sold off to individual families and were all used as family residences and sometimes as rentals.

In the 1970s Walter Wendelboth purchased several houses in the vicinity of 200 South and Lincoln St, reuniting these 3 houses under a single owner. Wendelboth also purchased and restored the grand Italianate home on the other side of Lincoln St at 929 E 200 South.

Wendelboth intended to demolish these houses and construct a high-rise apartment. For reasons I did not discover this never happened.

In 1988 the current owners acquired these houses and now propose to demolish them for an apartment complex.

The SLC Council is hearing the proposal this Tuesday March 2 at 7pm. @PreservationUtah has more info. 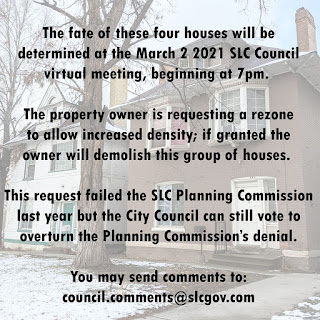