This house at 959 E 200 South SLC is known locally as “China Blue.” It was recently painted white but image 2 shows its previous namesake color.

The house was built about 1897 by real estate developer William Patrick O’Meara as a spec house, along with the 2 houses directly to the west (more to come on that trifecta!).

The first known occupants of the house were John J. Judson, his wife Frances, son Lyman, and servant Salma Hall. Their home was described as an elegant and modern. The Judson’s relocated to Los Angeles and sold the house in 1913.

The first long-time owners of the house were John and Bridget Cook who started renting the house in 1923 and purchased it in 1927. John was the supervisor of the Warm Springs Municipal Bath (Wasatch Springs Plunge at 840 N 300 W). John died suddenly in 1931 but his wife and sons continued to live and own the house until her death in 1957. During this time Bridget would also rent out portions of the house. She often stipulated “no children.”

In 1972 this house and several surrounding properties were acquired by Walter Wendelboth; the current owners acquired the group of properties in 1988.

It was in 1988 that this house lost its front and back porches, and the original windows and front door were replaced.

In recent decades, the house has become known as China Blue- a fixture of the SLC art and underground scene. Sean Fightmaster, the inspiration for SLC Punk! lived here and art, music, and parties were commonplace.

A notable incident involving Elizabeth Smart occurred here in the fall of 2002. A few months after she was kidnapped by Brian David Mitchell she was taken to party at China Blue by her kidnappers (Mitchell was after the free beer). Even though her face was veiled some party goers saw that Elizabeth seemed uncomfortable and asked if she needed help, but Mitchell intervened, and they left the party. Elizabeth was not recognized at the time and she remained missing until 2003. 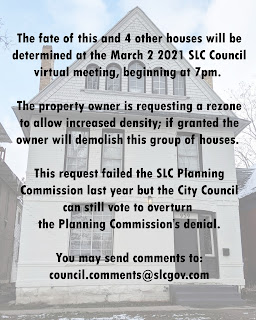