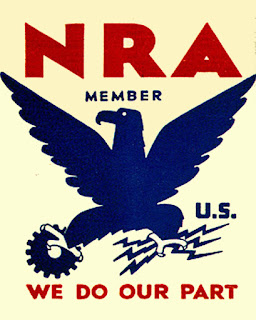 I spied these NRA posters in a 1933 photo of the Central Warehouse (see previous post).

These posters are not the National Rifle Association; they are of the short-lived federal agency the National Recovery Administration, which was a New Deal program during the Great Depression.

The NRA only lasted between 1933-1935 but had a profound impact. Some of the goals were to protect workers and ensure fair wages were paid.

Companies that signed the agreement received the “Blue Eagle” emblem to display. Some of the requirements were:
The emblem shows a Blue Eagle clutching a gear and lightning bolts symbolizing the power of American industry.

SLC and Utah companies eagerly signed up for the program as a show of patriotism. Not everyone followed the rules but even the appearance of a violation was problematic.

In Nov 1934 the NRA alleged that Myers Cleaning and Dyeing company of SLC violated some of the provisions and required the company to surrender its Blue Eagle. The very next day a large advertisement in several newspapers printed the signed statement from 40 Meyers employees stating that the company was in fact complying with all codes and it was an issue with one of their nightwatchmen. Meyers Cleaning stated they would be exonerated in a fair and just hearing.

The revoking of Meyers Cleaning’s Blue Eagle had implications beyond SLC. In Price, M. F. Meyers who owned the Acme Cleaners and Tailors of Price, needed to clarify that he was not connected with the Meyers Cleaning company of SLC and that his establishment strictly adheres to all provisions of the Blue Eagle code.

Read more about the NRA, the Blue Eagle, and its effect on Utah’s Labor Unions in the Utah Historical Quarterly 1986 article “The Economics of Ambivalence: Utah’s Depression Experience” by Wayne K. Hinton. The UDSH has made these freely available on issuu.com.

A Sports Note: The NFL’s Philadelphia Eagles were named after this Blue Eagle symbol in 1933.