NIMBYism and the Women's Rescue Home


This house in the Avenues also served as the Women’s Rescue Home for “fallen women” (refer to previous post).

In April 1898 the Rescue Home rented this house at 271 C Street SLC. Within the next 10 months the Rescue Home had 20 applicants, 5 births, 1 death, 1 marriage, 7 women placed in suitable outside homes, and 2 children were taken to the orphanage.

Neighbors on C Street did not take kindly to the Rescue Home and a petition circulated to have the home removed and for the SLC Council stop financial support. Thomas A. Horne and his wife Mary, who lived just north at 277 C street, were the primary objectors to the Rescue Home.

In Sept 1899, the petition was formally presented to the SLC Council. Among the complaints, “the women are boisterous, they make noise a great deal of the time and they sing indecent songs. They contaminate the children.” And “There are boys and girls of all ages about here. When they see these women they very naturally learn the reason of their being in the home and it thus makes it evident to them a condition which they are altogether too young to have knowledge of.”

Not wishing to antagonize the neighbors on C Street, the Rescue Home soon signed a 3 month lease on a larger house at 54 S 1200 East (still standing) from Judge Loofbourow and announced its intent to relocate. The residents of that neighborhood soon made vigorous objections and Judge Loofbourow, without notifying the Rescue Home first, cancelled the lease not wishing to antagonize his former neighbors.

In Nov 1899 the Rescue Home found another house in Perkins Addition neighborhood (~1700 S 1000 E) and paid 4 months rent in advance. Opposition was again boisterous, led by #UofU Professor Byron Cummings (Football Coach & Archaeologist) who objects because there were children in the neighborhood. The Rescue Home was given 3 months to vacate.

Frustrated, that the “respectable communities” protested the Rescue Home, they looked for a new location in the “slums” of Commercial Street (now Regent St) but they could not find a suitable location, likely due to the high rents that the brothels and other businesses could pay.

After months of looking for a new location, the Rescue Home’s Board of Directors decided that to continue the work would be useless and the entire board resigned in Feb 1900.

A new board was established who vowed to continue the work and even secured additional locations. University of Utah Art Professor Edwin Evans lead the protest against the 1458 S 1300 East location in March 1900.

Even after the Rescue Home closed itself to prostitutes and only allowed “reformable women who had errored” the neighbors protested so vigorously that the location at 51 S 800 East was abandoned by Jan 1902.

By Jan 1902 the whole organization was turned over to the Salvation Army who operated similar homes throughout the country with much success…. except in SLC. 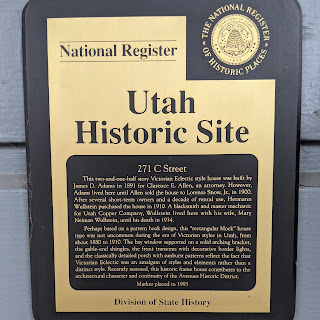 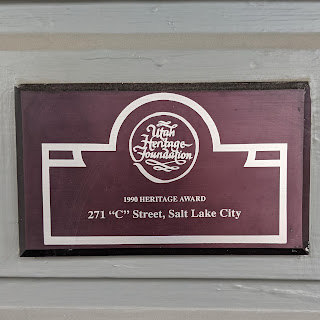