This missing middle apartment conversion complex at 435-437 S 400 East SLC was demolished this past week (Nov 2020).
This once stately duplex was built in 1901 by brothers Charles and Lorin Morrison. Charles lived on the north side at 435 with his wife Lucy and his daughter Lucile. Lorin lived on the south at 437 with his wife Kate, son Lorin, and daughter Laura.

The Morrison brothers were originally from Black Brook NY and traveled west to seek their fortune. In the 1880s the Morrisons ended up in Frisco, a now abandoned mining town in Beaver County, UT, where they lived for 20 years. Lucy Morrison recalled that for years she was one of the few women living in Frisco and it was a wild time with 25 saloons, claim jumpers, and cowboy gun fights.

By 1901, the Morrison brothers were in their mid-40s and settled in SLC while still earning profits from their many mining interests. Politics and clubs did not interest the brothers and they were primarily homebodies; Lorin was described as “a man of domestic tastes, his whole life is wrapped up in his home, and his beautiful residence…is frequently the scene of delightful house parties… He is an indefatigable worker and when his work is done he seeks the quietude of his own fireside.” The residence stayed in the Morrison family for decades.

About the early 1940s the property was converted into a 10-unit apartment complex. Throughout the 1940s and 1950s it provided low cost housing for young families.

During WWII, R. F. Langdon, an Army Private, said he felt fortunate to be able to find and afford a small apartment here where he, his wife, and his 2-year old daughter could all live together. At the time, many apartments did not allow children and this building was one of the few that allowed one child per couple. Many young families lived here.

By the late 1960s newspaper ads for the building listed “Adults only” and retired persons were the preferred tenant. In 1978 SLC mandated that this apartment, and other low-budget complexes, must comply with the fire code and a stairwell was added to the back.

A 37 apt unit complex with retail named “The Jasmine” will soon be built. 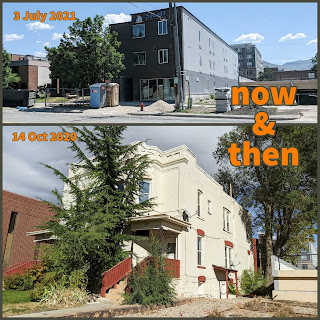