Places that SHOULD be haunted based on their histories

I’m not sure how ghosts work, but there are plenty of places around SLC that should be haunted based on their history. Here are a few areas that may qualify as Spooky Salt Lake City.
1. Sugar House Park, the site of the old Utah State Prison, was the scene of several executions and the site of a prison cemetery.
2. The Palladio Apartments were literally built on a burial ground. This block, just east of Pioneer Park, was the first cemetery of the Mormon Pioneers, which was also dug into an Indigenous burial area. All the Mormon settler’s human remains were removed in the 1980s and reburied at This is the Place State Park. But funding and time did not allow the same courtesy for the Native American burials; partial human remains were recovered from 3 individuals, and more were [are?] likely present.
3. Salt Lake County Government Center at 2100 South and State St was the former site of the County Hospital which often provided hospice care for the poor, including the first woman convicted of murder in Utah, Mary Jane Smith.
4. Liberty Crest Apartments, formerly the site of the Scandinavian Methodist Episcopal Church at 158 S 200 East, where serial killer Reverend Francis Hermans lived and dismembered his victims.
5. Judge High School was formerly the site of Judge Miners Home, which was repurposed during the 1918 Spanish Flu pandemic as a quarantine hospital. Of course, many of the Spanish Flu patients died during their stay.
6. The Bonneville Golf Course was the former site of an 1850s quarantine station where people passing through Emigration Canyon to SLC were required to isolate if they were ill. Also, later, a site for the isolation hospital that was commonly known as the Pest House. Undoubtedly the site of many deaths, and likely lots of children.
7. The stretch of I-80 (old US Route 40) between SLC and Wendover has been the scene of some terrible tragedies, including several plane crashes, train derailments, and vehicle accidents. 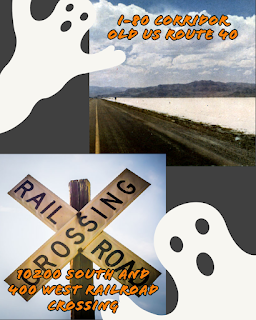 8. The railroad crossing at 10200 South and 400 West was the site of the 1938 Jordan High School Bus and freight train collision in which 23 students and the bus driver died.
Posted by Rachel Quist