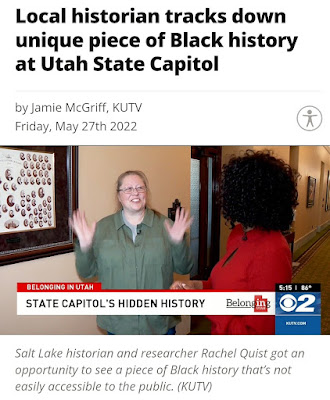 Look how giddy I am as I talk with KUTV reporter Jamie McGriff about H.H. Voss, a political leader of the SLC Black community at the turn of the last century.

H.H. Voss was (likely) the first Black person to serve as an officer of the Utah Legislature.

He served as a Doorman in the 1903 legislature which, as a Black person, was probably the highest rank he was allowed to achieve.

Voss was the unofficial "mayor" of Franklin Ave, now known as Edison Street, a mid-block alley just east of the Gallivan Center which was the center of SLC's Black community before it was overtaken by gentrification in the early 1900s.

He was a leader of the SLC Black Republicans (remember, Republicans were the progressive party at this time) and he helped "deliver the Black votes" for Republican candidates and issues.

He was rewarded with an official position in the 1903 Utah Legislature, probably the first Black person to be an officer of the legislature. I will need to tell more of his story later.