Some historic buildings that were saved from demolition in 2021 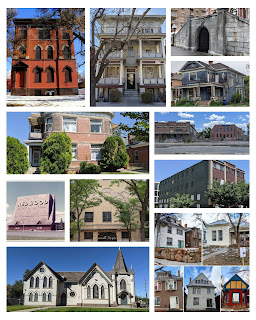 2. The Annex Apts, 150 E South Temple SLC. A project plans to rehab the Annex but it also demolished the Carlton Hotel next door.

3. Elks Block, 139 E South Temple SLC. Most buildings will be preserved, the Elks building will be renovated, the Elks tunnel entrance will be partially preserved.

4. House at 235 S 600 E SLC. The owner plans to add an addition to the back of the house and start repairs and rehab of the rest of the house.

5. Utah Pickle and Hide buildings at 737-741 S 400 W SLC. Some selective demolition has occurred but the main buildings are planned to be rehabbed.

6. Central Warehouse at 520 W 200 S SLC. The back half of the building has been demolished; the remaining front is to be integrated into a multi-use development.

7. These 5 houses on 200 East were subject to a rezone application which would result in their demolition. The rezone was not approved, and the houses are now being repaired.

8. 15th Ward Chapel at 915 W 100 S SLC was listed for sale which could have resulted in demolition; it was purchased by the Utah Arts Alliance and is now known as the Utah Art Castle.

9. Redwood Drive-In and Swap Meet at 3688 S Redwood WVC was proposed for demolition for a large housing project. Largely due to the backlash from the swap meet community the prospective owner decided to cancel the sale and development.

10. University of Utah’s Einar Nielsen Fieldhouse has undergone a seismic retrofit and will be converted to a theater.

11. Apt complex at 230 West 300 North SLC will be preserved while the area behind it will become additional multi-family housing.

It is important to note that only 2 of these projects had local historic preservation requirements for the property. All the others were only preserved because the owners desired it.

A big thanks to the owners, architects, engineers, and builders who all worked to keep some of Utah’s history standing.
Posted by Rachel Quist