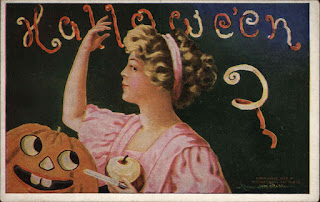 Some old magical rituals of Halloween involved apples as part of divination ceremonies, specifically where a girl’s future husband would be foretold.

One practice was for the girl to peel an apple in a single unbroken strip and then drop the peel behind the shoulder. The peel will form a letter that will be an initial of a future husband. Sometimes there are additional steps such as waving the peel three times above the head or saying some specific words while dropping the peel.

Another practice was for a girl to eat an apple in front of a mirror at midnight and then the face of her future husband would make an appearance in the mirror over her shoulder. Sometimes a candle is involved. Sometimes brushing of the hair is required.

Ruth Edna Kelley’s Book of Hallowe’en published in 1919 and now in the public domain (available free on archive.org and Project Gutenberg) states that by 1900 these apple ceremonies were largely considered party games, but these rituals were considered much more serious business in the centuries before.

SLC followed this pattern. During the 1800s, some old-timer Salt Lakers, especially those from Scotland, described these ceremonies in hallowed tones. But by the early 1900s the apple divination rituals were often part of Halloween parties and described in the Society sections of the local SLC newspapers.

Also, in the early 1900s many of these old traditions became immortalized on colorful Halloween postcard greetings (images 1-2). There were even “vinegar” versions of these postcards (image 3) similar to the Vinegar Valentines of the day. 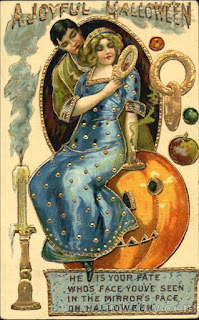 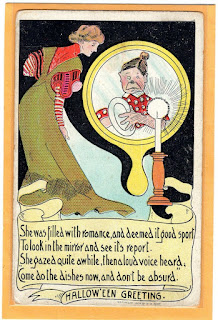