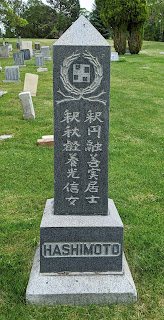 This headstone of Yozo Hashimoto (1851-1914) in the Salt Lake City Cemetery has an interesting past.

Yozo was one of the early Japanese immigrants to Utah and was a successful businessman. He supplied Japanese labor workers throughout the Intermountain West in the late 1800s.

One of the individuals he brought over from Japan was his nephew, Edward Daigoro Hashimoto (more on him in another post).

Yozo’s funeral was well attended by the SLC Japanese community and a large headstone was installed when he was interred in the City Cemetery.

The headstone featured a “swastika” symbol common in Japanese and Buddhist culture.
Decades later, on a Memorial Day during WWII, Yozo’s great nephew Dr. Ed I. Hashimoto, son of Edward Daigoro Hashimoto, noticed Yozo’s headstone had been tipped over. In his oral history, Dr. Ed Hashimoto said he presumed it was done by a bunch of kids because of the Nazi takeover of the traditional Buddhist symbol.

Dr. Ed Hashimoto, then the only living patriarch of the SLC Hashimoto family, decided to “erase the swastika” so the headstone would no longer be subject to vandalism.

His modification to the symbol is how the headstone remains today.