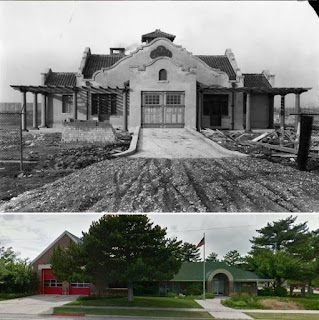 Then & Now. Fire Station No.7 located at 273 N. 1000 West, Salt Lake City, Utah (although the historic address was 273 9th West).
The historic photo is from 1923 (courtesy UDSH) and modern photo is from Google street view. The modern building was constructed in 1979.
By 1946, the old Fire Station No. 7 was determined to be inadequate to properly protect the Utah State Fairgrounds and surrounding neighborhoods. It had only one pumper truck and four men.
In 1963 $20K in funds were dispersed from Salt Lake City to renovate the building. Eventually it was replaced with this modern structure in 1979.
Posted by Rachel Quist