Another locally famous sculpture by Angelo Caravaglia is a cast stone fountain in front of the Wallace F. Bennett Federal Building at 125 S State Salt Lake City, which debuted in 1966. 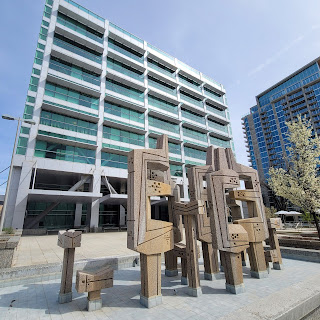 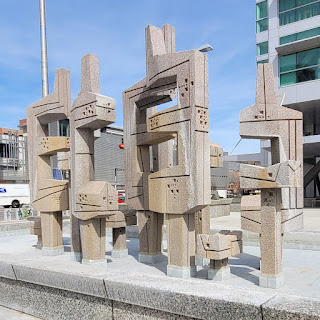 Caravaglia was prolific with his art, especially in the 1960s. In 1963 following a return from Italy his title at the University of Utah was changed to “three-dimensional designer” to better reflect his work. Notably, in 1964 he carved the wood doors of St. Margaret’s Chapel at Rowland Hall and in 1965 he was selected to create a bronze fountain for the old Salt Lake City Library (now the Leonardo).
The sculpture for the Federal Building was commissioned in 1965 under the Art in Architecture program and was a collaboration between architects Lloyd Snedeker and Wesley Budd and artist Angelo Caravaggio.

Snedeker recalled that “we didn’t want the usual pioneer woman but a contemporary statue. This reflects to some degree the shapes of the window mullions, the cast stone dividers and other architectural elements [of the Federal Building]."
Budd further explained that “when the sun shines on the sculpture the shadows offer many changing moods and the tone will seem to change color. We made several studies of a suitable sculpture and we are pleased with it.” And “the sculpture doesn’t represent anything in particular. We hope it will be pleasing to passers-by and serve as a conversation piece. “
The sculpture is a functional fountain and stands within a pool of water. Each of the 14 unique columns is piped separately for water. The spraying water runs in grooves etched into the design. The color of the material was specially selected to glisten in the lights at dark.

The reactions to the sculpture by Salt Lakers were mixed. Most were confused and asked what it was. Some praised it and found it to be appropriate for a growing city.

And some Salt Lakers disliked it, a lot. One man called it “lousy” and another said he would rather go back to the past if this sculpture represented modern art. And there was this classic response: It looks like heck.”

Caravaglia was not disturbed by any of the comments about the sculpture. His only direct response was that “The material it is made from will last a long, long time.”

Of note, this fountain has been featured in some local cult classic films including Revenge of the Ninja (1983) and Ruben and Ed (1991)
Sources
Posted by Rachel Quist