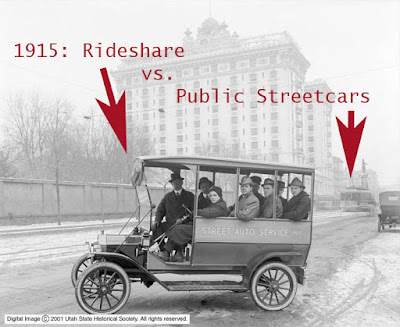 Car sharing is not a recent phenomenon, it is as old as the automobile industry itself. One of the more interesting events was the Jitney episode of 1914-1915, wherein private automobiles were used as rivals to street railways.

Jitney was slang for a nickel or five cents, the common fare for these services and as the craze quickly swept the nation these cars and busses became known as “Jitneys.”

The Jitney phenomenon was said to have started in Los Angeles on July 1 1914 when L. P. Draper picked up a passenger in his Ford Model T touring car and accepted a nickel fare as payment. Draper insisted this action was legal as he held a chauffer’s license.

The idea of Jitneys soon came to SLC and by January 1915 they were seen by many as a nuisance and a threat to the railway street cars, although others defended the Jitney as faster and far less stinky than the alternative. In SLC there were a number of independent operators as well as one company, the Street Auto Service Co, Inc., which operated 15 Jitney busses.

As with other cities in the nation, the SLC Board of Commissioners (now called the City Council) unanimously passed a special Jitney ordinance designed to vastly limit the Jitney’s ability to compete with public transportation. SLC regulation was swift and harsh:
This new city ordinance went into effect on April 1, 1915, and by April 4 nearly all of the SLC Jitney operators surrendered their licenses leaving only 2 Jitney busses in operation out of previous fleet of nearly 40 (Salt Lake Tribune 1915-04-10).
The Street Auto Service Co also struggled and the company was eventually acquired by a package delivery service. The requirement for the bond and the high license fee proved to be too costly for the SLC Jitneys to operate and the surviving Jitneys soon morphed into taxi or package delivery services.

By comparison, SLC’s ordinance was among the strictest in the nation, especially the high fees and requirement for 16 hours of continuous operation. Jitney drivers could no longer squeeze in a few hours of driving just before or after work, it had to be an all day job.

Of note, Salt Lake County also regulated the Jitneys but the ordinance was not as strict as SLC and was developed in consultation with the County’s Jitney drivers; as a consequence, Jitneys were still in operation in Salt Lake County jurisdiction for another year until the Utah Legislature decided it needed to get involved.