The killing of Salt Lake City Police Detective Greenville “Green” B. Hamby and the Fate of the Skin of his Assailant 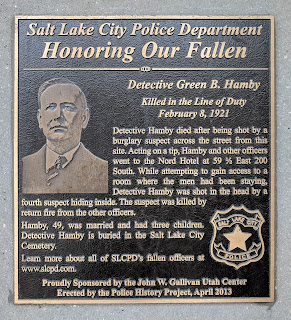 This is the story of the killing of Salt Lake City Police Detective Greenville “Green” B. Hamby (and the fate of the skin of his assailant).
This plaque memorializes SLC Detective Police Greenville B. Hamby who was killed in the line of duty in 1921.

On the evening of February 8, 1921, after an attempt to rob the J.C. Penny store at 231 S. State, the suspect Tom Gleason (alias Tom “Blackie” Burns) fled to the nearby Nord Hotel at 59 ½ E. 200 South where Detective Green Hamby found him.
When Detective Hamby opened the hotel room door, Gleason shot and killed the detective; in turn, Gleason was killed by Police Chief Clifford Patten.
No one claimed Gleason’s body and it was sent to the University of Utah medical school where a portion of his skin was removed and presented to the SLC Police. The police kept the skin in the evidence room, at least until 1935 at which time a local newspaper described it as a "portion of a hide of a man suspended to the wall."
During the follow-up investigation, the suspect Tom Gleason was identified by a special agent of the American Express Company as Joseph Alsheimer, an escaped convict of Madison Wisconsin.

A memorial plaque dedicated to the service of Detective Green B. Hamby was installed at the Gallivan Center in 2013.